Recently declassified file APO 696 from the National Archives, Washington, DC, contains a report and supporting documentation of the German nuclear program. The file was prepared by countless American and British intelligence officers between 1944 and 1947 and contains eyewitness testimony from German physicists, a chemist, a Wehrmacht missile expert, two Luftwaffe pilots, and several others.

The report concludes that while Hitler’s scientists failed to develop an operational atomic bomb, they were able to test rudimentary nuclear warheads as early as 1944. Among other items, the file contains testimony from German test pilot Hans Zissner who said that in early October 1944, he observed phenomena consistent with what we now know as a nuclear explosion. Zissner’s official test log states, “In early October 1944, I flew 12-15 kilometers from the nuclear test station near Ludwigslust (South of Lubeck, Germany).” “A cloud shaped like a mushroom with turbulent, billowing sections (at about 7000 meters) stood without any seeming connections over the spot where the explosion took place. Strong electrical disturbances made it impossible to continue radio communication.” Zissner estimated the cloud stretched for nine kilometers and described “strange colors” followed by a blast wave which required a “strong pull on the stick,” to counter.

An hour later, another pilot took off from Ludwigslust and observed the same phenomenon. According to other archival documents, Mussolini sent Italian correspondent Luigi Romersa to watch the test of a “new German weapon.” Romersa reported his ground-level observations to Mussolini. His remarks were very similar to Kissner’s statements. Around that time, Hitler told Mussolini that he planned on using V-2 rockets to carry his atomic weapon to Great Britain. 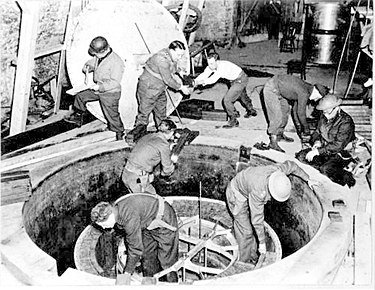 Testimony of the four German scientists’ mentioned a top-secret meeting held in Berlin in 1943 that was attended by Armaments Minister Albert Speer and Adolph Hitler. The meeting was referred to as the “nuclear summit.”  At this meeting, Albert Speer stated that “while the technical solution (to build an atomic bomb) was present, German nuclear ambitions would be limited by financial constraints and materials shortages.” One report of the era states “the Germans fell short of triggering the nuclear chain reaction necessary to yield a nuclear blast.” However, none of them could come up with an explanation for the testimony of trained observers about what they saw in the skies over Ludwigslust in 1944.

According to German Author Rainer Karlsch (Hitler’s Bomb, ISBN: 978-3-42105-809-6), recent Soviet research at one of the German test sites provides clear evidence that a nuclear detonation occurred. He further states that “German atomic tests were carried out in Thuringia on the Baltic Sea.” Karlsch describes the test weapons as a “hybrid tactical nuclear weapon” much smaller than those dropped on Hiroshima or Nagasaki. He said the last test was carried out in Thuringia on March 3, 1945, and “destroyed an area of about 500 square meters, killing several hundred prisoners of war and concentration camp inmates.”

When asked why this information has been so long in coming, Karlsch said, “We haven’t heard about this before because only small groups of scientists were involved, and a lot of the documents were classified after the Allies captured them.” Karlsch also found documents in Russian and Western archives. One of these was a memo from a Russian spy that was brought to Stalin just days after the last test. The report cites “reliable sources” witnessing “two huge explosions” on the night of March 3, 1945. These witnesses reported a light so bright that, for a second, it was possible to read a newspaper. They go on to say that a sudden blast of wind followed the flash. Eyewitnesses, interviewed by East German authorities in the early 1960s, said they suffered nose-bleeds, headaches, and nausea for days after the test. Karlsch further pointed to measurements carried out recently at the test site that found radioactive isotopes.

While it has been common knowledge for decades that the Nazis carried out atomic experiments, most historians didn’t believe they had tested an atomic bomb. The radiologic studies prove otherwise.

Why didn’t Germany Use their Atomic Bomb?

While Karlsch’s research suggests that German research into uranium went further than historians once thought, it concludes that Germany never achieved an efficient atomic reaction. Despite Hitler’s lust for ‘wonder weapons,’  German scientists were never able to produce an efficient nuclear reaction. This same problem plagued American efforts until US Army Demolition Experts found a way to use precisely timed conventional explosives to compress fusile material enough to reach the critical mass needed to sustain an atomic reaction.

The United States employed 120,000 personnel and invested $2 billion in the Manhattan Project. In contrast, a few dozen top German scientists were given only 8 million reichsmarks, about $2 million (in 1945 dollars), 1,000 times less. While Germany lacked the funding and engineering solutions needed to produce a nuclear arsenal, evidence suggests that Germany tested the world’s first low-yield atomic warhead in October 1944. It is also likely that the Reich tested at least three weapons by March 1945.

Given more time and funding, Germany would have resolved their technical problems and used its rocket technology to create the world’s first nuclear missile. Fortunately, the war ended in May of 1945, months before German scientists could produce an efficient atomic weapon.