Should the U.S. rethink our carrier-centric naval strategy? 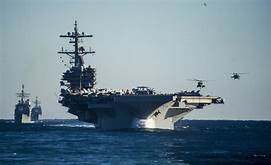 In 2020, lessons from the Japanese use of emerging technology (aircraft) in WW2 cause people to question whether today’s emerging technology requires the U.S. to rethink its carrier-centric strategy. Paramount in this debate is the concern over carrier vulnerability to modern anti-ship missiles.

In response to these and other concerns, the Chief of Naval Operations said in 2019 that U.S. carriers are probably less vulnerable today than at any time since World War Two. Planners in the Office of the Secretary of Defense have also started moving away from the notion that emerging carrier threats are a compelling reason to reorganize the Navy. According to some Department of Defense analysts, a more cost-efficient fleet consisting of smaller forces of uncrewed vessels would place fewer lives at risk and provide greater ‘ bang for the buck.’ Despite these arguments, U.S. naval doctrine remains carrier-centric.

While carrier safety concerns have been around for decades, China’s induction of the world’s first operational anti-ship ballistic missile (ASBM) has increased angst. U.S. intelligence reports that these ‘carrier killers’ utilize both conventional or nuclear warheads and can target medium and large naval vessels at ranges of 3,500–5,000 kilometers (2,200–3,100 mi). China also appears to be developing second-generation ASBMs that use hypersonic maneuverable reentry technology to search for ships. These weapons’ high-speed maneuvers significantly increase the difficulty of intercepting incoming ASBMs. Other countries such as India and Russia are believed to have similar weapons under development. Thus, the question is, will the ABSMs render carriers obsolete?

To this end, the U.S. has developed electronic warfare (EW) systems under the Surface Electronic Warfare Improvement Program Block 3 (SEWIP-B3). The goal of SEWIP-B3 is to counter the latest generation of enemy ASBM technology while adding offensive electronic attack capabilities. SEWIP B3 is an electronic attack weapon that can locate, jam, and disrupt inbound threats. SEWIP-B3 can also conduct offensive operations against enemy communications networks, datalinks, radar systems, and other electronic sources. SEWIP-B3 is designed to be installed on Navy DDG-51 Class Destroyers and is on track to be operational in the next few years.

The SEWIP-B3 electronic warfare system utilizes sixteen Active Electronically Scanned Arrays (AESA) to emit groups of targeted, individual “pencil” beams at a threat. One advantage of AESA over technology that projects wide overlapping beams is that it allows the system to direct energy precisely where needed as the danger approaches. Since the Block 3 system operates at machine speed, it can rapidly engage fast-moving enemy vehicles and cause an ASBM to destroy itself shortly after detection. Block 3 is agile and fully programmable for various threats. The use of integrated individual narrowly-configured beams allows the system to track multiple threats and limit their own-ship signature emissions simultaneously. SEWIP works by confusing inbound anti-ship missiles to the point where they are battle ineffective. EW systems also have the advantages of unlimited magazines to protect warfighters against incoming threats.

Because this new EW weapon transmits a narrow signal, it is less likely to reveal its location than systems using wider scanning technologies. Another advantage is that SEWIP can turn off emissions and enter a passive and silent mode to detect enemy signals without emitting any signature and revealing the ship’s position.

By design, EW provides non-kinetic networked options that can achieve an impactful non-explosive battlefield in which ships can track and destroy a multitude of enemy hardware. The ability to destroy an enemy missile without creating large amounts of explosive debris has many advantages in a heavily trafficked ocean area.

While enemy threats to the carrier are evolving, EW technologies such as SEWIP-B3 can significantly reduce carrier risks from modern missiles while expanding the fleet’s offensive capabilities. With these facts in mind, ASBMs are not likely to force the U.S. to depart from a carrier-centric strategy in the immediate future.