The Sinking of the Reuben James 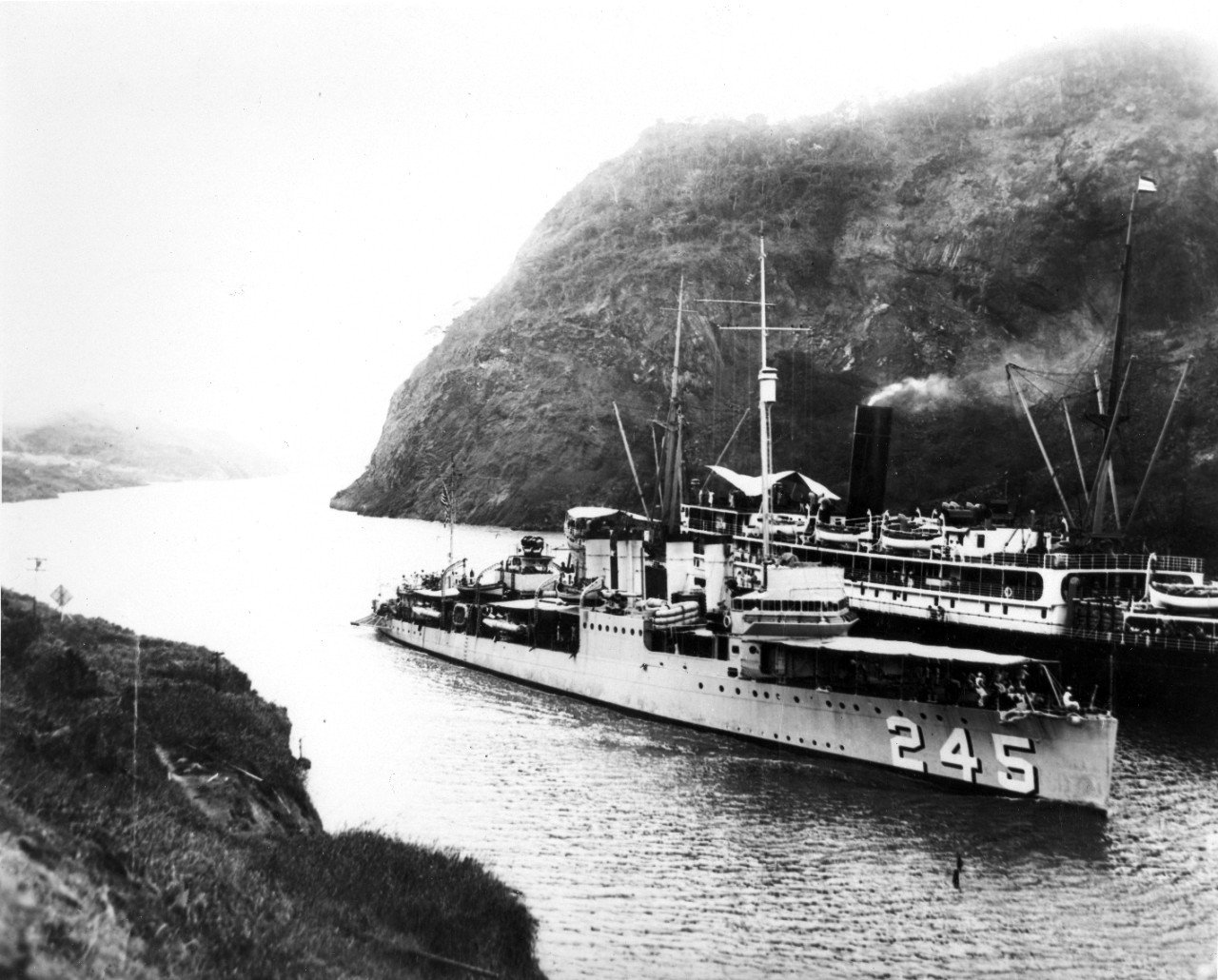 On October 23, 1941, the USS Reuben James and four additional U.S. destroyers sailed from Naval Station Argentia, Newfoundland. The man-of-war was escorting eastbound Convoy HX 156 as part of a growing effort to thwart the significant allied losses to German submarines in the Black Pit.
The Black Pit, also known as the Mid-Atlantic Gap, was an area beyond the reach of allied long-range antisubmarine aircraft. The absence of vital air support in the “pit” resulted in heavy shipping losses to German U-boats. The pit was not effectively closed until Very Long Range Liberator bombers and escort carriers came on the scene in May 1943.
Since German U-boat attacks began on January 13, 1941, Nazi submarines dominated the waters off the U.S. East Coast, sinking fuel tankers and cargo vessels with impunity. In just ten months, U-boat attacks had destroyed twenty-two percent of the U.S. tanker fleet and 233 ships in the Atlantic Ocean and the Gulf of Mexico. These unprovoked attacks killed over 5,000 passengers and sailors. By its conclusion, the Battle of the Atlantic would become the most protracted military campaign of World War II (1939 to 1945) and consume over 102,000 lives, 4,000 ships, and 750 aircraft from both sides.
Early in the war, in an attempt to calm the public, the U.S. Navy persuaded the news media to submit to government censorship and not report German success or the horrific loss of life. As Americans scanned the skies for enemy aircraft, they remained oblivious to the carnage at sea. Censorship also allowed U.S. Naval Leadership to remain ineffective for far longer than would have occurred had a public outcry been heard.

The early morning sky was a pumpkin-like orange and red on October 31, 1941, as U-552 slid like the angel of death through the dark waters toward her happy hunting ground. The submarine was nicknamed the “Red Devil” and proudly wore an audacious painted red devil on her conning tower. The devil had already destroyed twenty-two ships and sank 24,401 tons of allied shipping. Since German Grand Admiral Karl Donitz did not want to enrage the U.S. Navy, he instructed his captains to avoid attacking U.S. military vessels and focus exclusively on cargo interdiction.
When Captain Erich Topp (U-552) reached the observation deck, his executive officer pointed to the convoy’s smoke plumes on the horizon. As the horizon brightened, Topp could make out several ships through his binoculars, the hunter selecting his prey. When he prepared for battle, Topp always felt the same excitement he had experienced on his first stag hunt as a boy. As his mind peeled back the layers of time, Topp remembered sitting in a hunting blind near a Bavarian meadow.
“Take careful aim, Eric. Squeeze the trigger slowly and will the bullet into the deer,” his Uncle advised.
Bang!
The large antlered animal recoiled from the bullet’s impact, ran about fifty meters, and fell dead.
“Great shot! You got him!” his Uncle shouted.
The sheer delight of harvesting the magnificent deer and his Uncle’s pride when he placed the trophy above his mantle were among his fondest memories. The deer was the largest harvested on his Uncle’s farm and remained a source of great family pride to this day. That was his first kill. Now, years later, he had taken twenty-four ships and over a thousand lives. He was a killer who was very good at his craft.
Captain Burke Eieger stood in the conning tower with Captain Topp and his Executive Officer and said, “It can be exhilarating, almost addictive, can’t it.”
Topp said, “Yes. It’s like hunting. We slip in, remain silent, take careful aim, and fire without our prey ever knowing we’re there.”
“I remember it from the last war,” Eieger replied with a hint of sadness in his voice. It was a sadness that came with maturity.
Topp issued orders to his executive officer (XO), “Make our speed two thirds, periscope depth, intercept course. We’ll attack the largest merchant ship. Load all forward tubes.”
As the crew responded, Topp took one last look at the convoy. This time, he noted two destroyers were moving toward the group.
Topp looked at his X.O. and said, “We’ll go in quietly and fire on one or more merchant ships. Let’s stay at periscope depth long enough to see the detonations. If need be, we’ll fire a second spread, then dive deep and slip away.”
Topp felt the submarine begin to turn as he and Eieger climbed down the ladder into the command center.
After several minutes, Topp asked, “What is our current position?”
The X.O. consulted the navigator and replied, “110 km west of Iceland. The closest enemy ship is 1,000 meters from our current position.”
Topp commanded, “Raise the periscope.”
When the periscope fully extended, he turned it in the direction of the convoy, noted the ship’s speed and range, then issued a firing solution. Once he had crew compliance, he slowly ordered, “Fire One, Fire two, Fire Three, Fire Four.”

Bridge of the Rueben James

The X.O. reported to the ship’s Captain, Lieutenant Commander Edwards, “Sir, we have detected what may be a U-boat. It’s in position to fire.”
“If there’s one U-boat, there’s probably a pack of them out there licking their chops. Maneuver us in-between the U-boat and the merchant ships,” Edwards replied.
“Yes, sir!”
The Captain stood and peered through his binoculars in the direction of the U-boat’s last reported position but saw nothing other than grey ocean.
“Hopefully, this will stop them from firing on the convoy. So far, the German Navy hasn’t fired on a U.S. Warship. If we can pinpoint their position, then we can attack. Prepare to deploy depth charges,” Edwards told his X.O.

Captain Topp watched in horror through his periscope as the USS Reuben James began turning into the path of his torpedo spread.
“Shit!” Topp said under his breath as the U.S. destroyer continued into harm’s way. There was no recalling the torpedo now. The situation was out of his hands.
Topp watched silently as one of U-552’s torpedoes struck the Reuben James on her port side and exploded the forward magazine. The force of the explosion blew off the ship’s bow section. Unsecured depth charges compounded the carnage as they exploded and killed all survivors in the water. Of a crew of seven officers, 137 enlisted men, and one enlisted passenger, 100 died. Edwards and his officers were among the dead.
Captain Eieger knew something was wrong and asked Topp to look through the scope.
Eieger looked in horror at the burning wreckage and asked, “Was that a U.S. destroyer?”
Topp said, “Yes. It turned into the path of one of our torpedos. I’m not sure whether to admire the Captain’s sacrifice or be repulsed at his stupidity. I guess the world will never know which quality he exhibited today.”
Eieger nodded his head but kept his emotions to himself.
“We can head back to Germany now. We’re low on supplies and torpedoes, and my orders are to get you back to Keil as soon as possible.”
Eieger said, “Thank you, Captain. I have much to report to Admiral Canaris.”
Topp looked at Eieger. His curiosity was getting the best of him. “If it’s not top-secret, can you share your assessment of U.S. readiness?”
Eieger said, “All I can say is that they are well below full war production, and their naval tactics are making their merchant marine easy prey. When the U.S. reaches full war production and gets a million men or more in uniform, they’ll become a real threat. That will likely take at least a year. The fact that Germany just sank our first U.S. Man-of-war will have a profound effect on their psyche. Even the U.S. Navy will have a hard time hiding the loss of a destroyer and her crew from the press. This incident will awaken a strong resolve in the Americans.”
Topp swallowed hard.

Check out my new novel, Operation Grey Wolf and my author’s website at kentgiles.com